Come 15:00 the conditions started to improve, I wanted to rig but no tug pilot! a quick call to TC solved that problem. 16:00 I had a launch followed by Mike Codd in his Ventus. The main ridge was working nicely and it was relatively easy to find an energy line and go exploring. As the airmass dried out and became a lot more stable there were definitely signs of wave. I was surprised when I contacted wave over Y-das, though unfortunately the sun was sinking faster than I was rising, so couldn’t get a ladder flight and had to break off whilst climbing at 2 kts, landing at 20:00 (at least I could derig in the light).Turning up in the morning with the cloud halfway down the hill, drizzle in the air and a cold front on the way — didn’t look very promising we would be getting airborne. The tug pilot decided to go home after a couple of hours of watching cloud base descending. 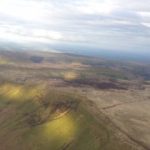 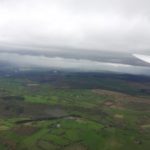 A really enjoyable evening flight and both of us getting some wave. Thanks to Tony who came up to give us a launch.