One of my ambitions this year was to fly a 500km task specifically from Talgarth. On the evening of 1 July, Julie King produced a Topmeteo forecast for 2July and it really looked like there was an excellent opportunity to fly in a very large area of England. 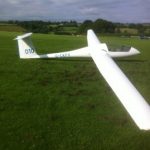 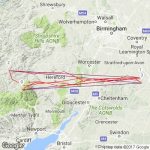 I had a preplanned task for this opportunity which was Talgarth, Shenington, Builth Wells, Swalcliffe (just south of Shenington) and then back to Talgarth.

I got the glider ready early morning on Sunday while it was still cool then helped de-rig the K13 which was due for its annual. This delayed briefing and so having emerged from there I put the glider on the grid straight away. At this time of day I really didn’t think I could hang around so I launched at 11.18 and started the task at 11.42 from about 4000amsl. The going was reasonably straightforward but it wasn’t always easy finding the cores in what looked like good clouds and half way down track I found that I seemed to be sinking between climbs more than I anticipated so my glides were generally short with top ups. I heard two pilots talking of wave interference so perhaps that was the problem

Rounded Shenington at 13.05 and set off back to Builth. All was going reasonably well until I was about 5 miles short of Malvern and I couldn’t see any decent lift. This was a bad mistake on my part and I should have diverted south somewhat earlier because I found myself in the lee of Malvern being sucked down to about 600ft agl and I then had to scrabble to get any height. After about 20 minutes I was re established in a 3 knot climb which I used to reach 3600amsl. Mustn’t make that error again the the 4th leg! Finally Builth came into view though it was looking bluer which was a preface of what was to happen later, Rounded Builth at 15.14 then headed straight for Ydas where there were clouds and was soon on the march again. Got up to 4800amsl near Pershore and could clearly see Bidford then finally got to Swalcliffe at 16.47.

Turned and headed back and although the climbs were weakening a bit I was still getting averages between 2.4-3.0kts. I didn’t even notice that I had passed over Malvern until I looked down. This time I was at a comfortable 4200 amsl but it was clear that the sky was bluing out as I headed for Hereford which I reached at 18.15.

Then the struggle began and I had to slow down to 60-65 kts picking up on wisps producing less than 2 kt climbs. My Oudie showed that the wind was gently backing so as I approached the back of the Black Mountains I knew I must give them a big clearance as the air would be flowing down and also on the main ridge. I started to get a bit tense (to put it mildly) since I probably needed at least two more climbs.

I turned north west running parallel to Cefn Hill at about 3000amsl I ran into a line of steady sink for several kilometres. I increased speed to get round the low hills heading straight for Hay on Wye. There is a little hill just south of Hay which I have used before and I aimed at this which initially gave me a 1/2 knot of lift. After the fourth turn I was climbing and perfectly centred (for once) at about 2kts which rose to 3. As I climbed all previous tension melted away, I was grinning like an idiot and just knew I was going to get home now.

I broke off at 3000amsl and flew home at 90 kts knowing I was a bit tired,had finished my water 20 minutes earlier so no silly fast finish. Arrived at the site at about 1000ft and landed at 18.51 with relief and the great satisfaction of achieving that objective.